Cloud Foundry is a Open Source PaaS solution. It is available as a public cloud at http://cloudfoundry.com operated by VMWare, but it is also a solution you can bring in-house and install on your own servers, or even operate on Amazon like AppFog does.

BOSH is a cloud oriented tool chain for releasing, deployment and lifecycle management of applications. It abstracts away the underlying IaaS solution (AWS, OpenStack, VMWare) and performs requests for new virtual machines etc. It also handles the distribution of “Jobs” to the virtual machines in the BOSH setup. In some ways you can say that it eliminates the need for Puppet/Chef, but it uses some different concepts. It also covers more, like the provisioning of virtual machines.

In a cloud platform, VMs are usually cloned from a template. A stemcell is a VM template containing a standard Ubuntu distribution.A BOSH agent is also embedded in the template so that BOSH can take control of VMs cloned from the stemcell. The name “stemcell” originated from biological term “stem cells”, which refers to the undifferentiated cells that are able to grow into diverse cell types later. Similarly, VMs created by a BOSH stemcell are identical at the beginning. After inception, VMs are configured with different CPU/memory/storage/network, and installed with different software packages. Hence, VMs built from the same stemcell template behavior differently.

Deployments - From static release into runnable software on VMs.

A deployment is something that turns a static release into runnable software on VMs. A Deployment Manifest defines the actual values of parameters needed by a deployment. During a deployment process, BOSH substitutes the parameters in the release and makes the software run on the configuration as planned.

A release contains collections of software bits and configurations which will be installed onto the target system. Each VM is deployed with a collection of software, which is called a job. Configurations are usually templates which contain parameters such as IP address, port number, user name, password, domain name. These parameters will be replaced at deploy time by the properties defined in a deployment manifest file.

Jobs are a realization of packages. A job contains the configuration files and startup scripts to run the binaries from a package.

There is a many-to-many mapping between jobs and VMs - one or more jobs can run in any given VM and many VMs can run the same job. E.g. there can be four VMs running the Cloud Controller job, the Cloud Controller job and the DEA job can also run on the same VM. If you need to run two different processes (from two different packages) on the same VM, you need to create a job which starts both processes.

BOSH uses monit to manage and monitor the process(es) for a job. The monit file describes how the BOSH agent will stop and start the job, and it contains at least three sections:

Usually the monit file contain a script to invoke to start/stop the process, but it can invoke the binary directly.

packages - Configration of how to compile & install packages

A package is a collection of source code along with a script that contains instruction how to compile it to binary format and install it, with optional dependencies on other pre-requisite packages.

Packages are compiled on demand during the deployment. The director first checks to see if there already is a compiled version of the package for the stemcell version it is being deployed to, and if it doesn’t already exist a compiled version, the director will instantiate a compile VM (using the same stemcell version it is going to be deployed to) which will get the package source from the blobstore, compile it, and then package the resulting binaries and store it in the blobstore.

packaging script that is responsible for the compilation, and is run on the compile VM. The script gets two environment variables set from the BOSH agent:

When the package is installed a symlink is created from /var/vcap/packages/<package name> which points to the latest version of the package. This link should be used when referring to another package in the packaging script.

There is an optional pre_packaging script, which is run when the source of the package is assembled during the bosh create release. It can for instance be used to limit which parts of the source that get packages up and stored in the blobstore. It gets the environment variable BUILD_DIR set by the BOSH CLI which is the directory containing the source to be packaged.

The releases folder contains the yml file declaring the content of the release : packages and their dependencies.

src - The source folder from which the release is created

The source folder from which the release is created

To create final releases you need to configure your release repository with a blobstore. This is where BOSH will upload the final releases to, so that the release can later be retreived from another computer.

To prevent the release repository from becoming bloated with large binary files (source tar-balls), large files can be placed in the blobs directory, and then uploaded to the blobstore.

For production releases you should use either the Atmos or S3 blobstore and configure them as described below.trying out BOSH and don’t have an Atmos or S3 account, you can use the local blobstore provider (which stored the files on disk instead of a remote server).

NOTE: To config the blobs storage, the configration file is config/blobs.yml 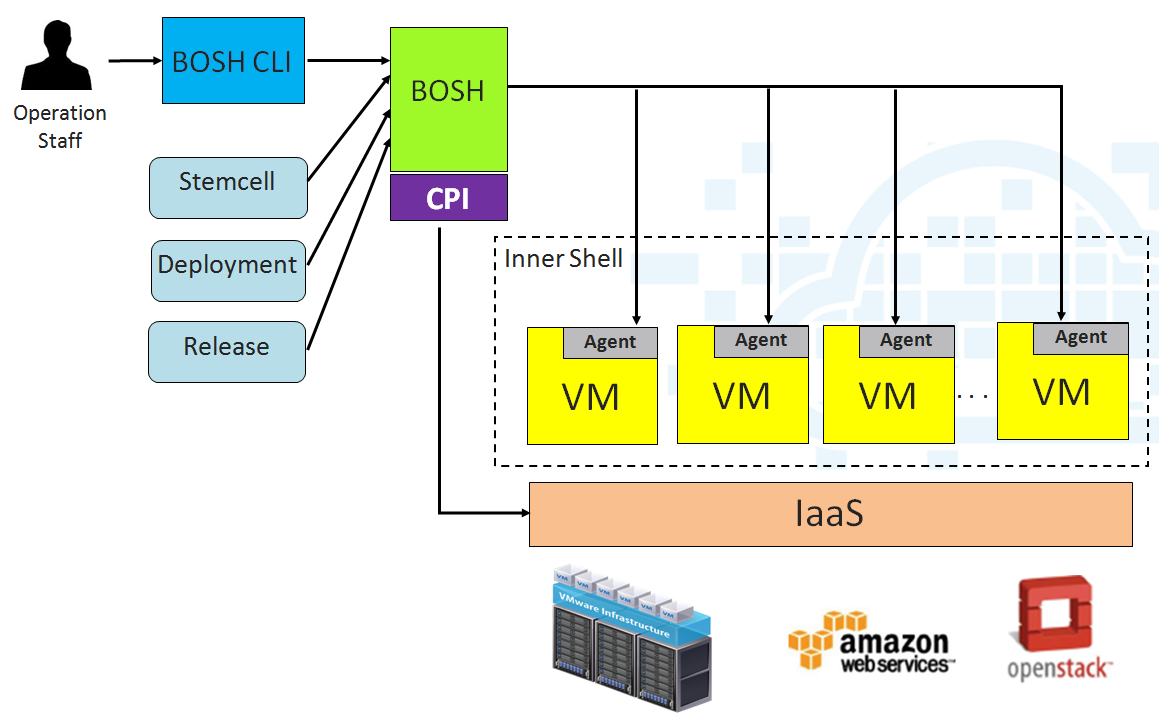 How BOSH do scaling 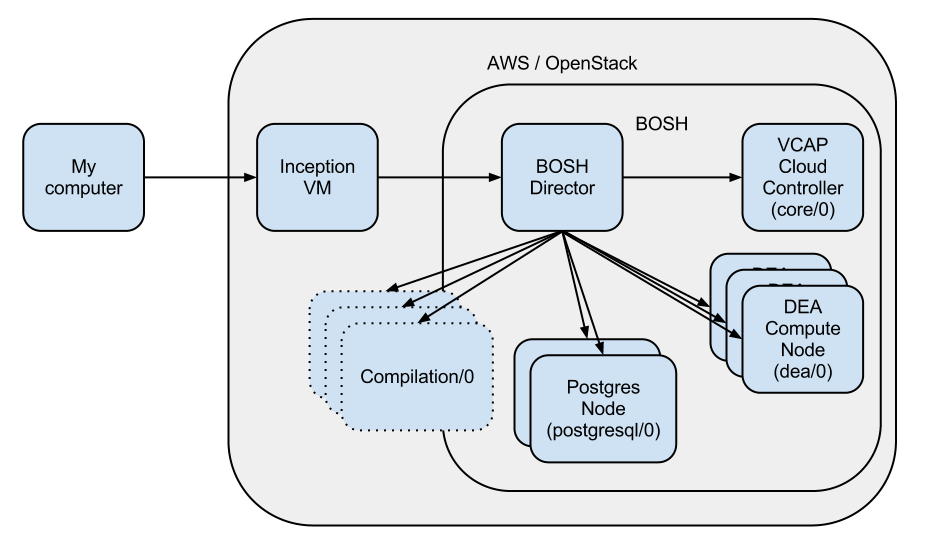 Steps of a Deployment

When you do a deploy using BOSH the following sequence of steps occur:

Network spec specifies a network configuration that can be referenced by jobs. Different environments have very different networking capabilities, so there are several network types. Each type has a required name property that identifies the network within BOSH and has to be unique.

Job is one or more VMs (called instances) running the same software and essentially representing some role. Job uses job template, which is a part of a release, to populate VM with packages, configuration files and control scripts that tell BOSH Agent what is to run on a particular VM. The most commonly used job properties are:

There are two kinds of properties that can be featured in the deployment manifest.

Instance spec is a special object accessible to any job configuration file, similar to properties (actually properties is just a shortcut for spec.properties, so they are just a small part of spec). It contains a number of properties that can be used by job creator to access the details of a particular job instance environment and potentially make runtime-based decisions at the time of creating a job.

Two important parts of the instance spec are job and index. job contains job name and index contains 0-based instance index. This index is important if you want to only perform some actions (i.e. database migrations) on a particular job instance or want to test a new feature only on several instances but not all of them. Other things available through this spec are networks and resource_pool which might be useful to get some data about job whereabouts.

Deployment manifest is a YAML file but it gets processed by ERB before being actually used, thus it might contain ERB expressions. This allows BOSH Director to substitute some properties saved in its database, so that sensitive or volatile data is only set at the time of deployment but not by manifest author at the time of creating the actual manifest.

You can set the property using bosh set property <name> <value> and then reference it in the deployment manifest using <%= property(name) %> syntax.